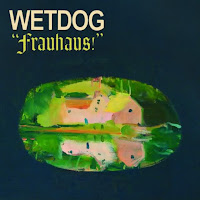 This is another band that was wisely (as wise as an algorithm can be) by last.fm. Anyhow, I suppose if it works that is why I keep using the site. While being another all female comprised band, I think that is a minor note but the one that lead me to them probably, through Frankie Rose and the Outs and Trash Kit most likely. They do bear a certain resemblance to both of those groups, but aren't quite the same as either. In fact a band that Wetdog reminds me more of is They Shoot Horses Don't They. The strange, intermittent beats and the slightly distorted, chanting vocals are quite eccentric indeed. At times Frauhaus! summons images of a haunted carnival or a wildly bizarre like that. They make post-punk leaves me not only stracthing my head but thoroughly enthralled.
To be had here:
Wetdog - Frauhaus! [192 VBR kbps]
Posted by Antarktikos at 9:48 PM