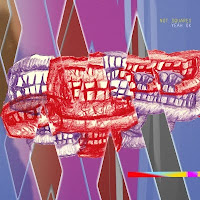 Another band from Belfast, Northern Ireland that I actually heard about reading an interview with the previous Northern Irish act to be posted on this blog, Girls Names. Needless to say, I was thoroughly impressed by and I could hardly wait to share this. The sound of Not Squares though is not like Girls Names lo-fi post-punk, but rather is some exciting fast-paced electronic music easily suitable for the dancing of humans. I do believe they self-describe themselves as disco house, but I am as unfamiliar with that term as many of you doubtlessly are. There are some wickedly catchy beats and bass is mesmerizing, yet my favorite part is the singing of all thing. It fluxes between solo and ensemble all the while carrying the music to a different place in tracks like "Asylum" and "Bi Kan Na." However, it some tracks it is less prominent or masked with a robotic sound such as in "In Front" and you'll sense that the band still knows completely what they're doing. Although a late in the game declaration, likely my favorite electronic album of the year.
To be had here:
Not Squares - Yeah OK [192 VBR kbps]
Posted by Antarktikos at 6:33 PM