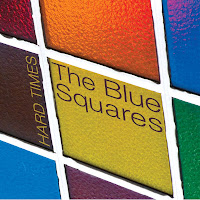 If the retro garage rock sound of yesterday's Shannon and the Clams offering had you wanting more, or if you wanted to try a different band in that style for whatever reason, the Blue Squares could just what you're looking for. Mellower than most all the other garage rock I've been posting, this band is from our bittersweet city of Detroit. They sound incredibly like the 4-Wheels compilation I mentioned yesterday, but also they are uncannily akin in sound to Cincinnati band the Greenhornes (half of whom teamed with his Detroit rockers Jack White and Brendan Benson in that shitty band). Despite my unfavorable disposition toward some the member's of the Greenhornes later projects, I do still like to hear their albums and having a band pick up a similar sound is a boon for me. The Blue Squares therefore can't be called original but that isn't the point of making retro music. They do a damned good job at making this music though, and the crooning of the singer is dead on. Good to see Detroit has forgotten how to make music like this.
To be had here:
The Blue Squares - Hard Times [128 VBR kbps]
Posted by Antarktikos at 12:01 PM