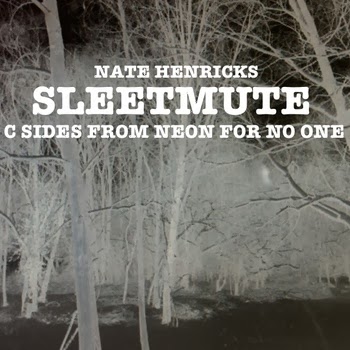 A brand new release by Nate Hendricks who has been really pumping out releases all the fucking time but my dim-witted ass can't keep up. I think it was sadly enough 2 years ago that I posted this dude, like last was NTH MERIDIAN, and that's a travesty as his music is really the bee's knees. This doesn't mean I haven't given him a listen in the intervening time, in fact I have found he is evolving as a songwriter and when I sat down this morning to really give him a solid listen I was blow away at just how much he has progressed. This album is all over the place in tone and style and I can't resist it, although I am all too aware I do it too often, comparing it to an Elephant 6 album. There is a most elegant mixture of genres and absurdity that left me most utterly charmed upon hearing this album. Perhaps my favorite addition I noticed straight away was the use of strings, it makes several of the tracks such as "Charmed Life" and "Black Lodge Waltz" assume a most delightful folky theme. Moreover, he incorporates a gospel elements in songs like "Stranger Things" if you can excuse the belch at the beginning. Finally, that album even has comedic parts with the track "10 Missing Dogs" being basically an audio sketch not unlike something from Superego. In a nutshell, I liked to a great deal and bet y'all might too.