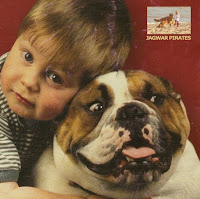 Couldn't have asked for something better to come back with after a break in posting. Jagwar Pirates are a very noisy French surf rock band that the label Cocktail Pueblo sent me. Largely instrumental, as surf rock frequently goes, these guys really make the most of heavily distorted and distorted guitars. They've got a darker tone that makes them a bit harder than most surf I've heard lately, and I find I greatly enjoyed the mildly haunting style (hard to imagine with that kid and his pup as the album art). Intensely fun to hear regardless of how heavy it may be relatively. Found myself remembering that wonderful film Six-String Samurai with the post-apocalyptic setting and the Red Elvises. Also the only track to have vocals, "planet claire," echoes the "Peter Gunn Theme" from The Blues Brothers (commenter pointed out it's a B-52's cover which may be why I felt I knew it). If a surf rock album, especially one that is so noisy and lo-fi as this, can summon pleasant memories and all sorts reactions from me then I most certainly think its done a good job.
To be had here:
Jagwar Pirates - Full Total Complete Bronzage [320 kbps]
Posted by Antarktikos at 4:34 PM