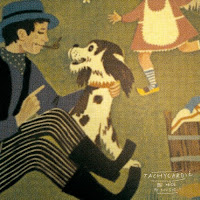 Sent to me by the same French label that released Jagwar Pirates, Cocktail Pueblo, I finally got around to sitting down with Tachycardie. First and foremost, this guy is into noisy experimental rock. Some of the tracks fall very much in the vein of bands like Liars, Ex Models, and Neon Hunk ("futuristic dancer" and "bicycle riding" in particular). Although, they do throw in some tracks that are really better summed up as droning noise, and these serve well to break up the frantic pace in other parts of the album. The whole affair is really just a brief 22 minutes, which begs comparisons to sweetly shirt releases like the Mae Shi's Heartbeeps and the crazy shit from the Gerogerigegege. Can't say I've listened to a bunch of stuff like this lately, but also can't think of a good reason why I haven't as it is an incredibly enlivening experience. Almost as good as a stiff cup of black coffee from jarring my mind into alertness with less stomach aches to boot.