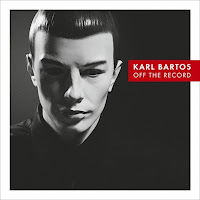 This is not a submitted record, but with all the attention Daft Punk has been getting for their excellent new record, it reminded me of another electronic music pioneer that has a new record out this year. Karl Bartos was a member of Kraftwerk during their most influential period, and has been plodding along for years after leaving the band. His new set of songs, “Off the Record,” can be described as a companion piece to Daft Punk’s Random Access Memories. While Daft Punk’s newest celebrates the disco and R&B roots of electronic music, Bartos rediscovers the more experimental and disunite sounds that were pioneered in tandem with the genres various club incarnations. Just like Kraftwerk records of old, you can dance to “Off the Record,” and there are more than a few pop rhythms and hooks, but Bartos’ work creates a bitter environment where the only beings dancing are ghosts left in the machines mankind has let degrade. It is fascinating music, and one of my favorite records to be released this year. Bellow is one of the best tracks off the album, “Musica Ex Machina.”