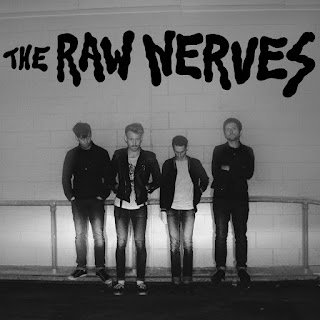 I got lazy with this record - for almost a year. Not sure why - the punk contained herein is of the lo-fi, fun, and garage-y ilk... quite possibly the lone punk record I've listened to multiple times over the past year (save for The Wipers impeccable Youth of America). It wasn't until I saw a Pitchfork recommendation for it that I was reminded that Spacerockers need to hear this thing. Unfortunately, since Pitchfork is like the Whole Foods of music journalism, as soon as they graced the record with it's attention, it went from being a "pay what you want" record to $5.

But, much like fresh caught fish is worth the extra money over the farmed variety, The Raw Nerves are worth your shekels.

Imagine Billy Childish meets Australian punk rockers X (different from the other band called X). There's no sophistication, which The Wipers had in spades and I champion them for, but that's a fine thing for The Raw Nerves. Punk doesn't need sophistication and most of the genre actively shuns it, which is why this record is special I suppose. It doesn't really stand out in any discernible way, it's just a straightforward take on a classic, and it's great.

Catchy without being poppy, snarky without being bratty.... if all punk rock sounded this good I might actually give a crap about it most of the time.

Posted by Amazing Larry at 5:04 PM