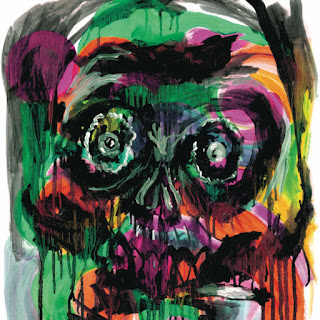 At times there is nothing better one can do than wake up, drink a pot of very black coffee and listen to garage rock. Really sets a tone of excited invulnerability for the day to follow. Honestly, this is as close as I get to eating breakfast. Of course, not all garage rock is equally suited for this task. In particular the fuzzier, faster and more psychedelically hazy the better it is when I'm in this state of mind. Found just the thing in the submissions, a group called Häxxan, billed as a "mega-huge garage band" by their label. Gotta hear that, right?

Though they hail from the Israeli city of Tel Aviv, Häxxan could have fooled me into believing their where among the Capetown garage rockers or one of the numerous awesome Spanish or French lo-fi outfits. The reason I bring all these other places up is to make a sloppy reference to how I think Häxxan is as good as any of the garage rock I've recently posted like the Fizz Pops, Baston or Bicycle Day. Their sound could be described as between the Stooges and the Ganglians, sharing heavy, distorted rock elements of the former and the charmingly surreal vocals and composition of the latter. Songs that really display the psych-garage fusing best are "Never See Me Again," "Ben Zona" and the utterly brilliant "Hail C-La-C." The whole damn album is awesome really.

The vinyl was issued Munich, Germany based label, Heroic Leisure, although there are very few left at the time of this post being published. Good news though, a Dutch label called Geertruida is issuing it as a cassette and those only came out earlier this month. Hopefully there's plenty still be available.