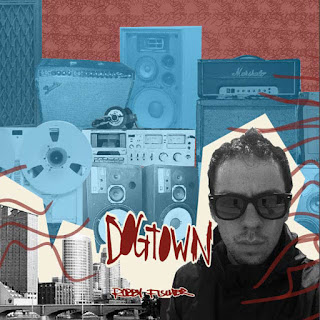 I've still have more fuzzy garage rock that's been stuck in the inbox for far too long. Here is an album that came out in September but I was privy to for some time prior, enough to be embarrassed by the tardiness of this post. However, the moment I stop feeling ashamed I guess I'd better worry about being psychotic, massively drunk or dead. The music helps though, especially when so exquisitely lo-fi as Grand Rapid's Robby Fischer.

This is the second full-length from Robby Fischer after You've Changed came out earlier this year, though there's an earlier EP worth checking out as well. Dogtown keeps the pace of very outrageously fuzzy weirdness of his prior output, perhaps being even a bit more bombastically so. I welcome this completely, it is the sort of album that a fan of garage rock having actually take the time to play won't consider letting it end before it's done. The songs are rapid, washed out and full of very pleasing guitar and thunderous drums. What's more in the true tradition of garage rock he's made a selection of songs to make covers of, and even more on point they aren't songs you'd guess. Soft Cell's "Tainted Love" which reminds me of Mark Sultan's cover of Ultravox's "Just for a Moment" in sentiment and Tayler Swift's "Trouble," a song I'm only vaguely familiar with. I imagine I'm not a fan of the original nonetheless I really dug Fischer's version. All this isn't to say his own composition aren't stellar, for that are certainly relentlessly intense and enthralling throughout. If you've like any or all of the garage I've been post over the last couple of months you can't miss this.

To be had here:
Robby Fischer - Dogtown
Posted by Antarktikos at 9:00 PM