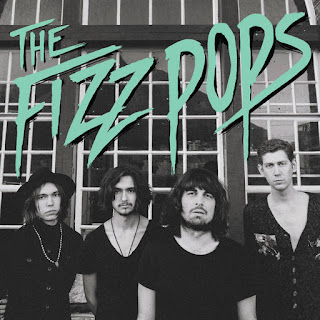 While I always look forward to hearing more music from bands I post on Spacerockmountain and wish I had vast amounts of time free to listen to it all, there are some artists I will go outta my way to hear. I just know they're gonna be a real treat, something worth pausing all the busy, dumb shit I gotta do. These lads from Capetown, South Africa are a perfect example.

The Fizz Pops is the latest in a series of bands to emerge from Capetown features several of the same members. Singer/guitarist Johnny Tex and drummer Warren Fisher were in the Future Primitives, a band those split also lead to another South African Favorite of mine, the Gumbo Ya-Ya's. I feel like I re-explain this each time any of these guys puts something out, but guys it is important. This shit is all golden and should be sought after with vigor.

The name of the band could not be more straightforward. They're making fizzy sounding garage pop that as catchy and lovable as sugary soda. And here's the thing, they've got a cover of Thee Milkshakes' "Can't Seem To Love That Girl" on this album, a song that is a personal favorite. This isn't where the connection to Billy Childish ends as far as I am concerned, as the sound of their songs bear a heavily influence from the British garage rocker. Johnny Tex has a noticeably more British affectation to vocals than in the Future Primitives albums and the guitar playing shares Thee Milkshakes' mixture of quick, flashy pop and touches of surfy reverb. I get it, that music was fucking amazing and making anything akin to it is laudable. That said, these songs sound incredibly fresh and current, like it is exactly what I was looking forward to. Not a single dud in the tracklist, yet certain highlights include "Alright," "Tell You Something," and "Feel It In Time." Furthermore, I really gotta give huge kudos to the drumming and bass playing on this album, they carried me through each song like a tidal wave. Really neat stuff, folks.