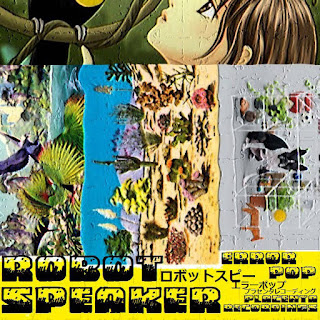 An experimental album from a Japanese electronic music called Takuma Ebisaw, a.k.a. Robot Speaker. It isn't easy to describe what he's made in this large collection of songs he's titled Error Pop. The tracks are all over the place, but that is completely the purpose of them. It is like running through a menagerie of audio landscapes at an increasingly rapid pace. It incorporates elements of j-pop and psychedelia with electronic genres like glitch and breakcore. Leads to a schizophrenic level of dissonance of the surface, but if you give it time to sink it there is a method to the madness that comes out the unlikely and short outbursts of sounds.


Also interesting to note is that this album is being issued by the Detroit label, Placenta Recordings. Looks like have a good deal of releases, as this is the #316, but it is the first I have heard of them. I should really like to find out what else they've been up to.

To be had here:
Robot Speaker - Error Pop
Posted by Antarktikos at 9:28 PM