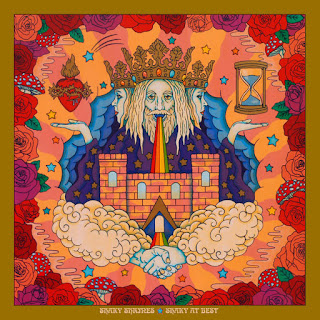 A couple of years back I posted an EP from a Pittsburgh outfit making a droning psychedelic rock. I thought it was pretty great and I still do, so I am happy to say SHAKY SHRINES still at it, in fact they've never let up, I just missed all the releases since then until now. My bad, folks, but one can't hear it all no matter what one wishes. Nevertheless, I'm glad to have hear this new album, SHAKY AT BEST. The surprise for me was how different the band sounded to me. I recall a lo-fi garagey psych band, and this album has an immediately identifiable polish indie rock style. But hey hey hey, don't turn it off, just keep listening. It might be more pop and shine than what I came in expecting, but it is done well. A good tune is a good tune, and why should a band stick to one genre anyhow? I missed what might have been evolutionary steps towards this in the last two years, but I like what I got anyhow.

All this isn't to say they shed all of the garage rock elements of the songwriting. Several are still quite catchy, lo-fi fuzz-fests. The vocals are clearer and more forward however, and the structure of the songs are more cohesive overall. A good album, totally worth checking out by eager indie rock fans. Highlight tracks for me were "Yr House Isn't Haunted" and "Tomato Tomato."

To be had here:
SHAKY SHRINES - SHAKY AT BEST

Posted by Antarktikos at 8:21 PM