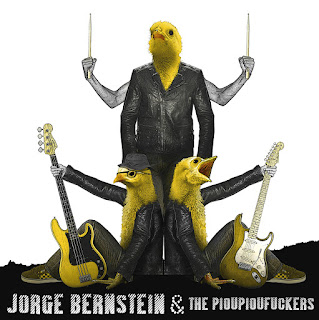 Often times when sifting through the mountainous amounts of music on bandcamp, there comes a release that really clicks for me. It takes a lot of time and a lot of sifting.... it makes me wonder: is this all because I've been adrift in an ocean of shit that I find this small dinky island, with one lousy jackfruit tree, that I think this is the most amazing piece of land to ever exist?

Maybe. But that feeling of discovery is invigorating enough to keep returning to the shitty sea, in hopes of finding more land, and to claim it for the nation of Spacerockmountain. However, with Jorge Bernstein and the PiouPioufuckers, I can't help but believe this music is truly fucking good, and that any reader with an ounce of the grey stuff between their ears is going to enjoy this.

"Let me introduce to you the best drummer in the world. First member of the Bernstein Corporation. President of the United States of rock'n'roll. Look at his yellow shirt!" So the band is a corporation headed by a mysterious Jorge Bernstein, who I guess is their drummer... whether or not that is his real name or a fictional character that he plays, we'll never know. Originally released in 2007, "Meet The Real Bernstein" may have been a smidgen ahead of the most recent garage revival. But this record could easily be released on Burger records tomorrow... because it's full of awesome, high energy garage punk with a bit of an old rock'n'roll feel to it... dare I say rockabilly? This may be more to do with the singers Elvis-meets-Jello Biafra sound.

Well worth a listen, and well worth checking out their other releases.

Jorge Bernstein & The Pioupioufuckers - Meet The Real Bernstein
Posted by Amazing Larry at 9:00 AM