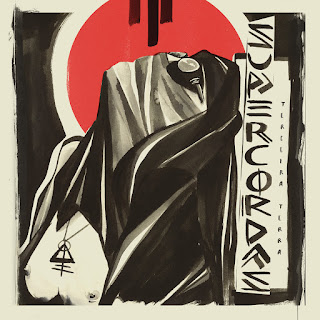 As always the posts are infrequent and sporadic, I am accepting that this isn't gonna change despite my best intentions. However, there's nothing like the release of an album from one of my favorite bands to spur me into action. Terceira Terra is the first full-length album since 2012's A Mágica Deriva Dos Elefantes from Supercordas, the Brazil's paramount wonders of psychedelic rock.

There's no possible way I would not enjoy another new from Supercordas, so take that as the absolute preface to everything that follows. I've listening to them for the better part of a decade and I jump on each new release, and for that matter anything from the lead singer, Bonifrate. They've never failed to be uniquely mesmerizing and memorable. Terceira Terra is a mild shift in tone from their prior albums, being a bit darker and denser.

As I don't know Portuguese myself I've relied on my friend in Brazil to explain a bit more about the album. It's something of a concept album, being about a parallel world that's a utopia free of corruption, which as you can imagine isn't all that perfect after all. I'm sure there's great many meaningful references in the lyrics that I'll never known until I learn the language, and I was only able to pick on a single reference in the title of the track "Espectralismo ou Barbárie?" to the spectral technique of composition and the French socialist journal Socialisme ou Barbarie. However, I've never understood the singing before, and it won't stop me from loving this album either. By the third listen through it felt like something I'd been intimately familiar with for a long time, that it was only natural to find myself anticipating each moment of the album. Not to be missed out on by any music lover.

To be had here:
Supercordas - Terceira Terra
Posted by Antarktikos at 1:02 PM