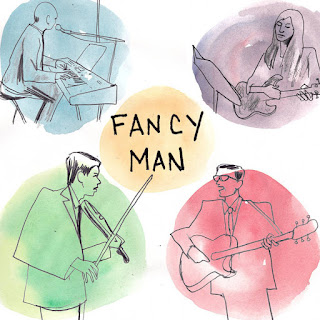 A new project involving that Korea-bound American singer-songwriter, Tim Cushing. You might recall his solo album from a couple years ago or perhaps the collaborative effort known as the Red Rogue. If you do then you might have an idea of what to expect from Cushing's particular approach to folk music which indeed carries over into this new band, Fancy Man.

A trans-Pacific undertaking, recorded in both South Korea and Los Angles, Fancy Man shows off what can be done by pulling in more instrumentalists to work with Cushing's quirky, whimsical lyrics and unique vocal delivery. As far as musical genre the tracks fall into an experimental ground between folk, lo-fi indie pop and even honky tonk country. It all feels intensely familiar from the very first listen. Perhaps it is just in the space created in the competency of musicianship and the lighthearted approach to the songwriting throughout the album. Whatever is the case it is hard to not desire hearing it again and again.

To be had here:
Fancy Man - Fancy Man