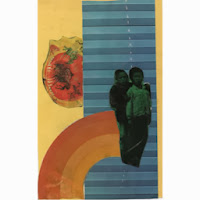 Here is a little secret for all you followers of Steve Jobs: nothing can replace audio tape when it comes to recording music. I have made tunes with countless programs and tools over the years, but nothing can touch the warmth reel-to-reel or cassettes capture. It has gotten to be a bit trendy with the trendy types to decry audio tape as nothing more than nostalgia. Those same critics have likely not attempted to recorded a psychedelic pop extravaganza to 4 track either.

I can't think of a more fucked up state than New Jersey, and thus I find myself with their very own Graham Repulski. It has some fucked-up Casio beat with down-tuned bass and guitar lines that capture the wonder of a recording session fueled by booze and inspiration. The tape (going for only 4 bucks) provides just enough surreal lyricism to match the rhythmic baselines, and should sit on your cassette shelf before hipsters turn on the format and leave it to the Black Metal legions again.