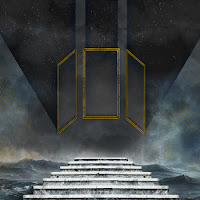 Los Angeles has seen a sizable, consistent, progressive music scene develop over the last two decades. When you have  a city with so many cultures and ideas forced to mix together, it is hard not to follow your music down the fusion proverbial hole. Some have borrowed from the 60s and 70s British scene, others embracing the metal and dark drone sounds. lightsystem seem to take from both while still charting the road Tool has well worn.

When the first track Glossolalia came through, other than the moody atmospherics one comes to expect from prog, I got a distinct whiff of Sting's Soul Cages, which was a pleasant surprise. I don't think I have ever recieved a press release from a band claiming to sound like Sting, so I hope they add that to their bio. Once the band worked its magic on their opening jam, it was time for the larger-than-life guitars and existential lyric embellishments. Well crafted epic tracks that did not drag or feel monotonous.

If this wasn't conceived as a soundtrack to some film, it should have been. Overall a very enjoyable release, I just wish I had a physical copy and was not limited to mp3 files.