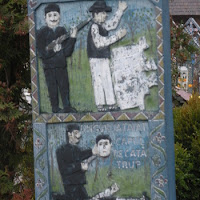 Not many folks say “did you get a load of that clarinet solo on that track?” It is odd that many of the old European instruments that were once a staple of music and culture have been abandoned by popular music in this part of the world. I saw a Banda act play the other day, and I was reminded that in certain countries (and parts of this one for that matter), horns and brass are still featured prominently in music.

Crown Larks from Chicago are a band that has found useful and exciting ways to use instruments outside of the familiar rock canon.  They put together what could accurately be described as Post-Rock, with long form songs that build to expressive highs and explode all over any basement apartment that's being channeled through.  What really helps this group stand out from their contemporaries is the creative instrumentation provided by Lorraine Bailey, the group’s member responsible for flute, keys, and clarinet. A track like “Pt. 4 Satrap” elevates these kids above the mere noodeling of music geeks with too much magnetic tape on their hands, and justifies a peek into just what is going on in the Windy City.

They are heading out on a massive 40+ day tour soon, so check them out when they come to your town or regret it forever.