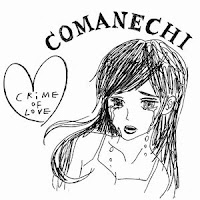 It is simply a mistake on my part not to have posted this earlier. Back when this blog was pretty new I posted an EP by Comanechi that I'd become enamored with and still go back to listen to regularly. While those were rough cuts of some of the tracks that appear on this debut album by this English duo. It is some rather intense garage punk/noise that falls in line with bands like Coachwhips, the Hunches, and the Intelligence. Unlike those groups though, it features a female vocalist which begs comparisons to Best Coast or Vivian Girls, but I do believe quite noticeably Comanechi is heavier and louder. She is one of the hottest singers I've seen though, I suggest googling some photos. I really recommend this if you've been keen on the other garage stuff about lately.
To be had here:
Comanechi - Crime Of Love [192 VBR kbps]

BONUS:
I have decided to re-share the EP by Comanechi as well, for the versions of the songs that appear on both are from a previous recording session and are considerably rougher. In some ways I like them even better.
Comanechi - One Pervert Knows Another (2004) [133 VBR kbps]
Posted by Antarktikos at 8:59 PM