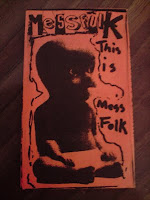 This is again garage punk and amongst the roughest shared on the blog. By "rough" I mean one of these is a demo tape which I think you might be able to buy directly from the artists stills. However, the other file here is the 7" that followed on Hozac records and is a higher quality recording of three of the tracks found on the tape. As for who these guys are, they are from Cape Breton, New Brunswick and read the founder describing their sound as "lower middle class white boy blues." Now I know this seems like a the sort of artist that would be submitting to a blog like this for support, but it was the other way around. I hunted these down after I was impressed by what I heard. By the way, I know some bands have sent me some stuff to listen to and decide on posting and I hope to get to that this weekend and if you saw the hassle of cords and programs I had to move music through you'd understand my sluggish nature on this front.
To be had here:
This is Mess Folk [2009] (128 kbps) demo tape