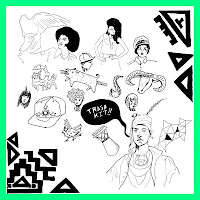 So I saw this on a link somewhere as similar to Comanechi, so I tread down that rabbit hole with vigor. The first thing I noticed about Trash Kit is their heavy usage of angular guitar melodies to such a degree that could be mistaken for a math rock band. If anything is, this is a good mistake. Undoubtedly, the cause of the comparison to Comanechi is the female vocals, and indeed this groups is comprised of females, but that doesn't matter as far as how righteous their sound is. In fact, the crooning of the singer reminds me of famous garage rocker, Holly Golightly. The best part of about the album is the brilliant composition short tracks. While I like wild trashing about considered as a song, this band did more than that and it is really worth hearing.
To be had here:
Trash Kit - Trash Kit [320 kbps]
Posted by Antarktikos at 6:21 AM