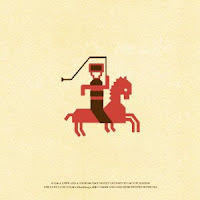 Jeremy Barnes's collection of musicians has released another fantastic album. Cervantine is the fifth A Hawk And A Hacksaw proper full-length, if the collaboration A Hawk and A Hacksaw and the Hun Hangár Ensemble isn't counted. To my ear it sounds like the band has gotten even bolder and quicker in the composition of the songs, certainly faster paced than 2009's Délivrance. For the unfamiliar, A Hawk And A Hacksaw, is one of many projects involving Jeremy Barnes, who notable was a member of Neutral Milk Hotel. Formed with Heather Trost, expanding accordingly since, it has been their main outlet for the last decade or so. Pulling influence from Eastern European music of Balkan and Jewish Klezmer, the band has relocated to Budapest since formation. A perfect segue for me to mention that I am going to Budapest, along with several other Central European cities for the bulk of May. To accommodate the blog and give people something to look over I have written some posts that'll appear periodically while I am traveling, just need to be looked over my buddy b to make sure I wasn't too terribly sloppy. Maybe he'll chime in with some noises he fancies.
To be had here:
A Hawk And A Hacksaw - Cervantine [320 kbps]
Posted by Antarktikos at 9:50 AM