Although likely well known to fans of King Khan and Mark Sultan, for the benefit of the rest the Spaceshits was the group from which that pair of modern garage rock nobility cut their teeth. Before the Shrines, BBQ, or the Almighty Defenders the were making raunchy, loud, distorted and wild music in Montreal venues earning quite the reputation. These three offerings are there 2 full-lengths and an double 7" release. While I am certain there are several singles and obscure collections out there I can't find them for the time being. The sound of these albums is much more like King Khan and the Shrines than Mark Sultan's solo work if I had to pick, but really it is far more rough and unfocused. However, with this lies a large part of the charm of these songs: the pure barbarous rock spilling from them. If you've liked any of the later groups or projects of the members of this band I must insist that you take the time you hear these albums if you have already.
To had to here: 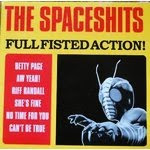