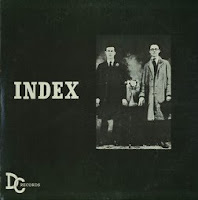 I don't know how I got this far without know about this band earlier. I've read that the Index was technically for Grosse Pointe, but that place can eat me. Alternatively, the University of Detroit has been referenced as the origin point for the group, yet I suppose both can be true. Anyhow, this is a Detroit psychedelic band that seems to have gone under-appreciated. The album is a lo-fi affair, like it was recorded in a shed or a stairwell, but that jives very well with the minimalist mood of the music. In fact, I do believe it was recorded in mono, which isn't something you get everyday. The real power comes from how they really just found that wandering sound that makes psychedelic music so soothing and beautiful. That the singer sounds a bit like Lou Reed didn't hurt anything. Eerie, handsome, and simple, doesn't get much better than that.
To be had here:
The Index - The Index [192 kbps]
Posted by Antarktikos at 10:02 AM