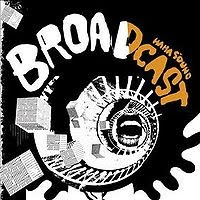 I had the pleasure of seeing Broadcast perform as duo with Atlas Sound opening at Lees Palace in Toronto last November, and I have to say, as difficult as the first half of it was, I loved every minute of it. Cryptic projections, noisey no-nonsense low frequencies that put my body into a microvibrational state and physically shook the air inside my lungs. After the first half, they played a more traditional pop song set with a good deal of songs off this album: a record arranged more as a full-piece rock band with experimental and electronic tendencies, rather than the more avant-garde work the duo are creating these days...

This album displays some amazing songwriting and production (you can hear the tape) with obvious influence from krautrock experimentalists, 60s sunshine psychedelia and folk music. Even though here they deviate away from elements that initially drew the likeness, it's easy to see how they were once often compared to Stereolab.

Other than that it's kind of hard to describe the air of of this album. There's something unfalteringly beautiful and dark about it that you have to hear for yourself; it's always this kind of stuff that I have the most amount of difficulty in describing what it means to me.