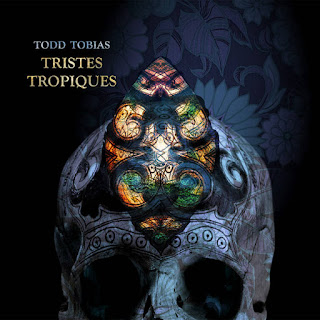 Had this album laying on the hard drive for a stretch and would have the worse of luck trying to sit down and hear it. My life seems much busier and I feel like I spend much more it waiting in lines and behind bad drivers than ever before. But seeing as it is unbearably hot the night I'm writing this and I cannot even pretend to try to sleep in my un-air-conditioned apartment I finally found myself with little recourse than to slip into the ambient with Todd Tobias.

Todd Tobias isn't new to SRM, I have very fond memories of listening to his Calvino-inspired album, Impossible Cities. Therefore, I entered listening to this album with some rather high expectations, which I am glad to report were not dashed in the slightest. The long, winding songs are all sublimely amorphous soundscapes. It is astounding how much weight is packed into every one of them despite their relatively sparse composition. It causes a transformative affect to occur in the diligent listener, altering mundane happenings into something absolutely poetic. For my second listen I sat on my balcony on a cloudy morning, watching birds peck around for food. With the help of Tobias's music, it was pretty damn epic.

Tristes Tropiques was released by Tiny Room Records and Hidden Shoal. Each labels worth worrying about to say the least.

To be had here:
Todd Tobias - Tristes Tropiques
Posted by Antarktikos at 9:59 AM