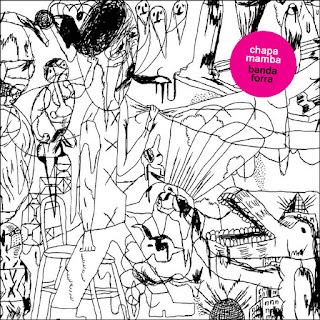 I'm acutely aware that the pace of writing has dwindled. Shit happens, people have families grow and others move around and get new jobs. What can you do about it? Nothing really. I am gonna write when I get time, maybe we'll hear from the other guys sometime, perhaps not. We ain't getting paid for this after all. Thus it's always been an as the mood strikes me affair until I figure out the next step in where to take this blog. This means submissions may languish for considerable lengths, I just haven't the hours in the week to keep up. To further gum up the works, I am super curious as to what's happening in Latin American music. It seems to be preoccupying me even since the Scenes of a City series began, so on top of trying to do some submitted material I am likely to be writing up South American music more regularly. Hence today's offering....

Don't really know much background on Chapa Mamba outside of their being a Brazilian band on the Rio De Janeiro based indie label known as Transfusão Noise Records, which was recommended for listening to me by my friend Babi. All that truly matters is how absolutely endeared I am by the music they've created for Banda Forra. It's a perfect blend of jangley indie pop reminding by of my stalwart favorites of the Elephant 6 collective, hazy Californian beach rock and, unavoidably to my American ears, the few Brazilian artists that have penetrated into the hipper crowds of these United States like Os Mutantes, Gilberto Gil and the lot. Chapa Mamba's songs embrace the tropical nature of Brazil in their experimentation, utilizing ambient sounds of wildlife in the background of the psych-pop songs, while at other times they are utterly and completely a pop outfit executing at the highest level of catchiness. Every little thing they do works seamlessly together. You won't be disappointed, I am sure of it.

To be had here:
Chapa Mamba - Banda Forra


P.S. As long as we're on the topic of Brazilian music I must recommend another album I learnt of by way of Babi, the 1973 self-titled release of Secos e Molhados. A band heavily influential and famous in Brazil that's hardly recognized in North America. They played a style mixed MPB (Música Popular Brasileira), glam and the progressive rock that was all the rage at the time. However, it powerfully transcends language, time and place. Good fucking music is good anywhere and anytime.

Posted by Antarktikos at 6:52 PM