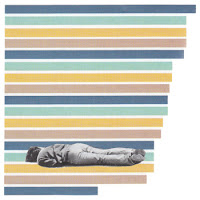 I lived in Connecticut for some time back in 2005. I worked around New Britain, which is just a stone’s throw from the town of Berlin. A beautiful place with lots of lovely buildings, and a dreadfully humid summer buttressed by an icy winter. It’s the state that has houses between larger, more important communities to the north and the south, and has had to live with that reputation for as long as it has existed.

Thankfully, some good acts do come out of the state. I heard plenty at house shows 8 years ago, and I get a slow (but constant) stream of submissions from Connecticut. The newest of which is one featured at SpaceRock previously: a band called Werewolf Police. Sharp hooks and reverb soaked vocals combined with a healthy love from the 90s lo-fi culture have resulted in their superb The Moderation Blues.  The record has the same aesthetic of their previous releases, but this set pushes their songwriting techniques and recording strategies to new levels. Undesired Raincloud captures my personal feelings about my time in Connecticut precisely, while Difficult Liquids so perfectly mimics the sound of the region that it could be taught at Wesleyan University.

This is great stuff, and since it is free to download, there should be no reason you don’t check it out.