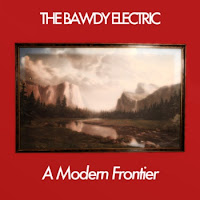 These lovely lads hail from the frozen, frigid north known as Montreal. I don't think they have any songs in French, which I can only assume means they get excluded from all respectable cultural events in Francophone Canada. Come to think of it, is there some kind of rivalry in the city's music scene between that perform in one language or the other? I'm imagining some pretty stellar street dance-offs between members of the rock community.

The Bawdy Electric put together pleasing pop-rock with big guitars and sing along melodies. This track instantly reminds me of power pop acts like Rick Springfield and Teenage Fanclub, with its impassioned vocals mixed with a pulsing snare hits that can't help but get my head bobbing along in cadence. This is the kind of stuff that I could see getting more than one rotation on mainstream radio, and hopefully these guys will get a taste of a larger audience sometime in their future.

It's big, it's fun, and you can pump your fists in the air like its 1986 while playing it. What more could you want?