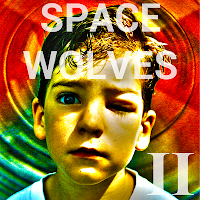 This is an exciting post as it's the first time I've been given the chance to announce an album's release and actually been able to take the offer up. Space Wolves, previously posted on the blog and rather recently at that, have a new cassette releasing today on November 8th. I've listened to this damned album like 4 times in a row and each time I find myself getting increasingly jazzed to hear each succeeding track. The jaunting and jangling lo-fi indie pop doesn't get old easily. As I did mention in the last post of Space Wolves, they've got a sound that strongly reminds me of the Lucksmiths and other Australian indie pop acts. This of course I mean as only high praise, as I still think that Australian indie pop is the fucking bee's knees. This sort of music is a highly functional salve for my bitterness that's built up from years of terrible customer service jobs and college courses. If I dare say a good reason to recall being sweet and lovely isn't always for naught.