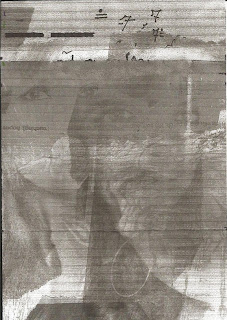 This is a cassette I recieved from the same fella in Arizona who submitted the Dual Mausoleums (now called People's Temple, I believe) album last year. I think, not with complete confidence, that they're labelmates rather than the same person behind this project. Either way, this is a related sort of sound, namely dissonance. The whole thing appears as a half-jest regarding the rejection of rock and roll, which is in fact played out avant-garde noise contained on the cassette, and more obiviously pointed out by the label's site: I Sold My Soul To Destroy Rock and Roll. Also found the note on the tape stating, "In October of 2011 the mentally ill joined forces and cut a hit record," to be rather enjoyable. However, it doesn't really matter all that much how you feel about their stances being a joke or honestly held, the fact is they've given you some noise music to consume if that's your thing. Goddamn fit perfectly with the latest extentialist novel I've decided to torture myself with this month.