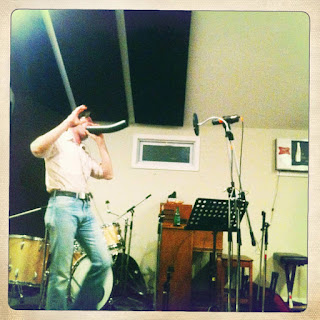 Soul music, to me, is the quintessential American music. I know that the blues, jazz, and hip hop are more important from a music history standpoint: those genres were catalysts for so much more. Soul is just my absolute favorite. It's danceable, it's about good times and bad times. It's also kind of a natural antidepressant for me. Just throw on some Irma Thomas or Syl Johnson and the world becomes a little brighter.

Seeing a resurgence with stuff like Sharon Jones and Leon Bridges is great. Hard to believe that soul music ever went out of style, quite honestly. But perhaps in Detroit, where The Wrong Numbers come from, soul never lost it's footing.

The Wrong Numbers play garage soul so well that Jack White would devolve into the primordial jelly from which he came just to sniff it. These peeps must all come from other bands, I'd guess... this shit is just too seasoned. "Bowel Sounds" is just 2 songs so far, but it's well worth your immediate attention if you're in the market for something frucking fantastic (edit: deciding to keep "frucking as is). Bummer that there's a $7 charge for just 2 songs(*), but I'm honestly considering it.

Look at the release date on this also: posted just 5 days ago. Hot off the frucking press... eh? EH? Ehhhhhhh... sorry. But for real, The Wrong Numbers have got it DIALED IN.

*Edit: Another song has been added! It's great! This is some 1960's Memphis soul, ala Wendy Rene. Amazing.