The History of Michigan Garage Bands in the 60s Vol. 1 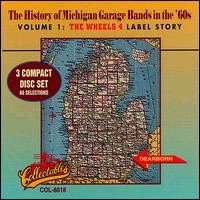 This shit is pure gold. I found this in the Port Huron public library years ago. Certainly one of the best discoveries of my entire life. Basically, this is a assemblage of tracks which were laid down in the 60s by a bunch of small time garage rock acts, and as the name suggests they're from Michigan. As was usual for the amateur (as in unpaid) garage rocker of that era, many of the songs are covers of popular hits. Nonetheless, I've never heard a version of Diana Ross's "Come See About Me" like the one done by Dearborn City Limits, and yes that is a name of one of the bands. In fact the names these young gentlemen chose for their bands are among the best parts of the album. There are great names such as House of Commons, Lykes of Us, Innsmen, The Hearsemen, Solitary Confinement, and Felix da Housecat (no relation to the modern electronic act). The selection of songs played is equally brilliant with numbers like "Ooo Poo Pa Doo," "A White Shade Of Pale," and "Hootchy Cootchy Man." The compilation is comprised of three discs with 60 tracks, nearly three hours of playtime. Because of the number of them sometimes I'll still find one I'd passed over too quickly and have a new favorite. Although definitely garage rock in the original meaning, these groups aren't going to sound exactly like the more recently garage sensations. In the majority of the cuts the singing is still clinging to the desire to be melodic, whereas being stunning is more important as far as I can tell these days. No fuzz, no crazed drum solos, no screams in this more conservative time of musicianship, yet to my humongous relief falsetto may be found herein. Despite the relatively calm attitude compared to modern garage, don't make the mistake of listening to it as a low volume, this shit need be pumped up. Unfortunately, the name is misleading in one thing, there is no second volume, but if I do recall correctly there's a compilation from the same people containing Texas garage rockers, which I sadly don't have but desperately yearn for.
To be had here @ 160 kbps:
Disc 1