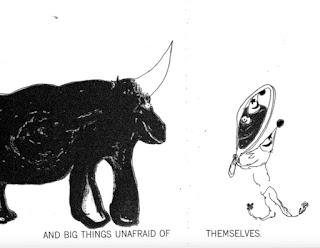 Olympia, Washington, where the smell of salt water competes with the aroma of roasting coffee (which smells a lot like burning toast), is also where some of music's most well known artists gestated and spewed forth definitive records of early American indie rock. It was ground zero for the Riot Grrrl movement, and both Beck and Modest Mouse recorded there. Kurt Cobain lived just east of downtown, where he wrote much of Nevermind - a record that sent a whole nation of angsty teenagers hurdling towards thrift stores, searching feverishly for smoke-stained plaid shirts. More recently, Olympia has spurred forth one of the greatest black metal bands in recent times, Wolves In The Throne Room, and has lead the country in amazing queer, d-beat, hardcore punk bands like G.L.O.S.S. and Slouch.

It's just happens to be a great town for bands. I remember walking downtown from my little black house near the San Francisco Street Bakery, and on almost every block you could hear bands practicing in garages, living rooms, and basements. The community is tight knit and insular which, while making the social scene a difficult nut to crack, makes for a strong and supportive environment for artists.

It's from this environment that my new favorite band has emerged. This is Scrivener's first recording I believe, and it's so good that I had to dust off this long-neglected blog to steer any lingering readers toward their bandcamp page. Their style is like glam-hardcore punk... and by "glam" I refer to the almost theatric vocal delivery. Usually with any genre of music, a vocalist will stick to one vocal delivery - singing, speak-singing (think post-motorcycle accident Dylan), screaming... etc. but Scrivener's vocalist moves fluidly through all, using a range of expression missing from the vast majority of punk singers, or rock vocalists in general. Take the screaming of any metal or hardcore band and add bit of animated, matter-of-fact conversation - it's such a fresh delivery that it keeps this record on constant rotation. Scrivener is simultaneously playful and brutal.

8 songs, pay what you want for digital or buy their self-released cassette tape through their bandcamp page.

Posted by Amazing Larry at 2:22 PM