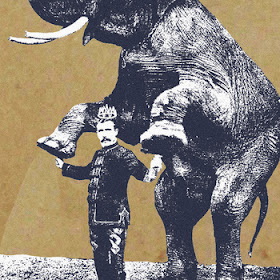 Back when the blog when in the transition from the wild west of file sharing into the submission-driven form of its current incarnation, one of the first labels to sent in music was the Cocktail Pueblo. I wasn't sure what I was gonna do with the albums, nor if I was even going to post submitted material frequently. Then the heavy hand of the law stepped in and shut down megaupload and super fast after that all my files disappeared from the site I'd been hosting on. Like a bomb went off and all that was left was submissions, like Cocktail Pueblo.

As I found this album on by own I haven't got any real background on Les Princes du Rock beyond they're being from Tours, France. Musically they've excellently blended psychedelic and garage rock. I am painfully aware I use those terms all the time for many things, and I know they're rather broad. Basically, some of the songs are long, far out explorations utilizing trippy guitar playing, while others are more focused on loud percussion, fuzzy bass and bellowing vocals. However, the best is when they combine them, such as in the magnificent track, "Holy Grail." Basically, it has it all, pilgrims. At least as far as lo-fi rock goes, which for me might as well be all the way.

Also, I noticed that this album was released in 2014, I assume by the band. What I found was Cocktail Pueblo's issuing, of which I am not sure will having a physical version. Through both links it's available with on a name your own price basis.